The Origins of Pilates 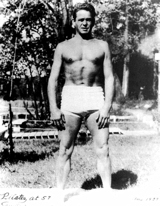 Pilates, as we know it today, was originally called ‘contrology’, and was developed in the early 1900s by Joseph Hubertus Pilates. Joseph was born and grew up in Germany and from an early age showed a natural aptitude for sporting activity. However he suffered from rickets, a disease affecting children where the bones become soft and weak; but this only seemed to spur him on to achieve greater fitness. By his early teens he had reached an incredible level of fitness considering his ailments, and was even asked to be a model for artists illustrating anatomical charts.

In later life, Joseph moved to England and taught self-defence to the English Police, but after the outbreak of WW1 he was placed in forced internment in Northern England. It was here he began to devise the exercises we know as ‘Pilates’. He worked with other detainees who were suffering from diseases and injuries. As he had no access to rehabilitation equipment, he created apparatus out of everyday items, such as bedsprings and beer keg rings, to create resistance exercise equipment for his patients. This was the crude beginnings of the Pilates equipment we know today, such as the reformer.

After World War 1, Joseph moved back to Germany and continued to develop his exercises and apparatus, working with the Hamburg police, and after several years he moved to America where he met his future wife, Clara. Clara suffered from Arthritis and Joseph was determined to cure her; together, they set up a studio in New York teaching the ‘contrology’ method to clients and patients. Leading New York dancers quickly became fascinated by the Pilates philosophy and it’s popularity grew and grew.

Eighty years on, the Pilates method is now prevalent all over North America, Europe and Australasia as people are realising the benefits of this exercise method.